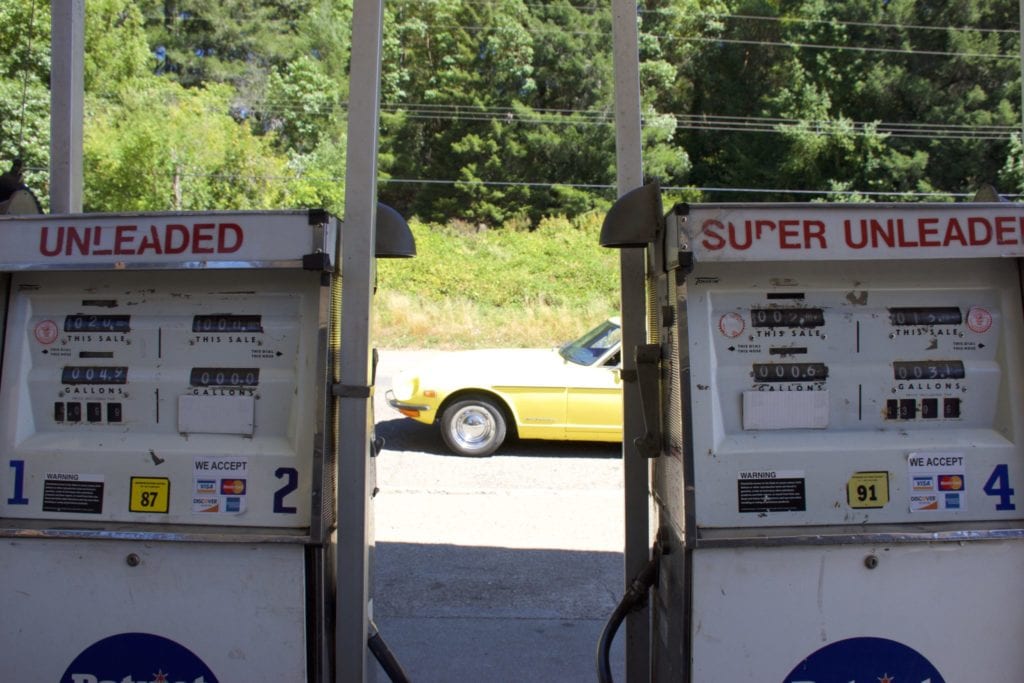 Summer was fleeting, so it was time to take advantage of the season before it was over. What better way to enjoy summer than with a good ol’ road trip up the California coast? With a long weekend and a lifelong travel partner, I decided to make my way up to Redwood National Park by car, something I had attempted alone a few years ago (and failed, because who wants to do that much driving alone). Here I describe the second part of my spur-of-the-moment Labor Day road trip, from Mendocino to Redwood National Park.

After camping overnight in Van Damme State Park, we stopped in Fort Bragg for a stroll around town and a light breakfast meal at Egghead’s, a super adorable Wizard of Oz themed restaurant. They have a lively downtown area spanning a few blocks, with a lot of shops selling handmade goods, gifts, and beach/seaside souvenirs. We didn’t stop by Glass Beach this time around due to timing, but with time, we definitely would have. Last time I went, I collected a ton sea glass, which is a rare sight to see and pretty exclusively found at Glass Beach.

We got gas, picked up some snacks and drinks (Yerba Mate seems to be a very popular drink in these parts of California) and were on our way up the US Route 101! 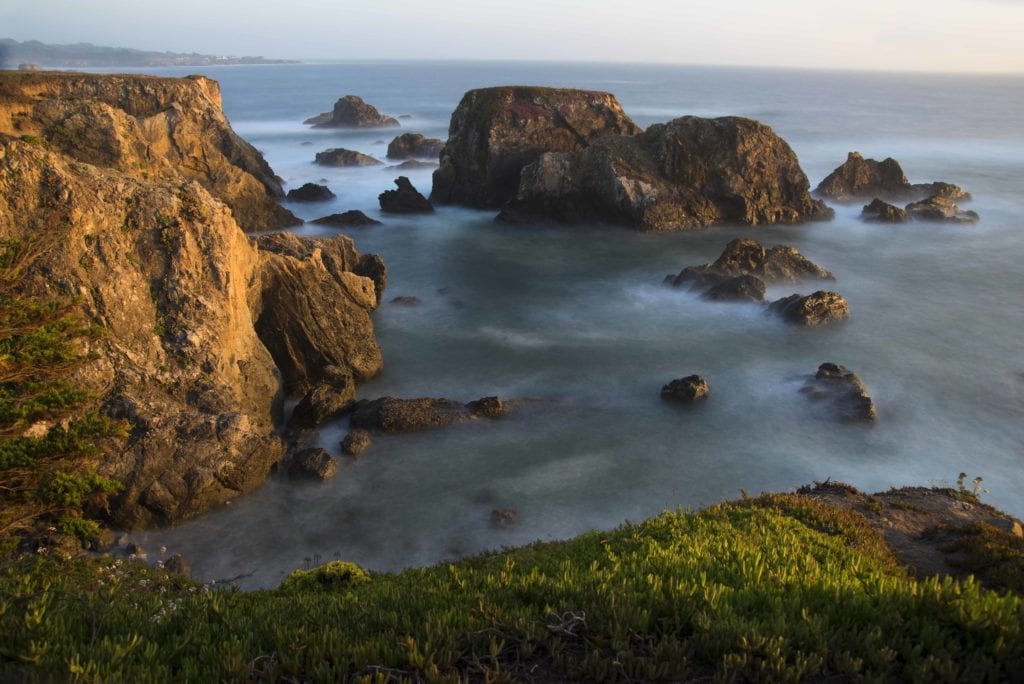 Confusion Hill is a prime example of roadside attraction magic. Kitschy, eclectic, and amusing all at the same time, this California State Point of Historical Interest has been attracting road-trippers since 1949. It features a gravity-defying house, Redwood Shoe house, mountain train ride, and the world’s largest standing chainsaw sculpture.

Confused and intrigued by its name, I just had to make a stop. If nothing more, at least I got to stretch my legs. The gravity house here rivals the more famous one in Santa Cruz (Mystery Spot), but for a fraction of the cost. We paid $5 per person to experience the gravity house, which was fun but left me kind of dizzy. Nevertheless, Confusion Hill is a perfect break from the road. There is a gift shop and snack bar here as well. 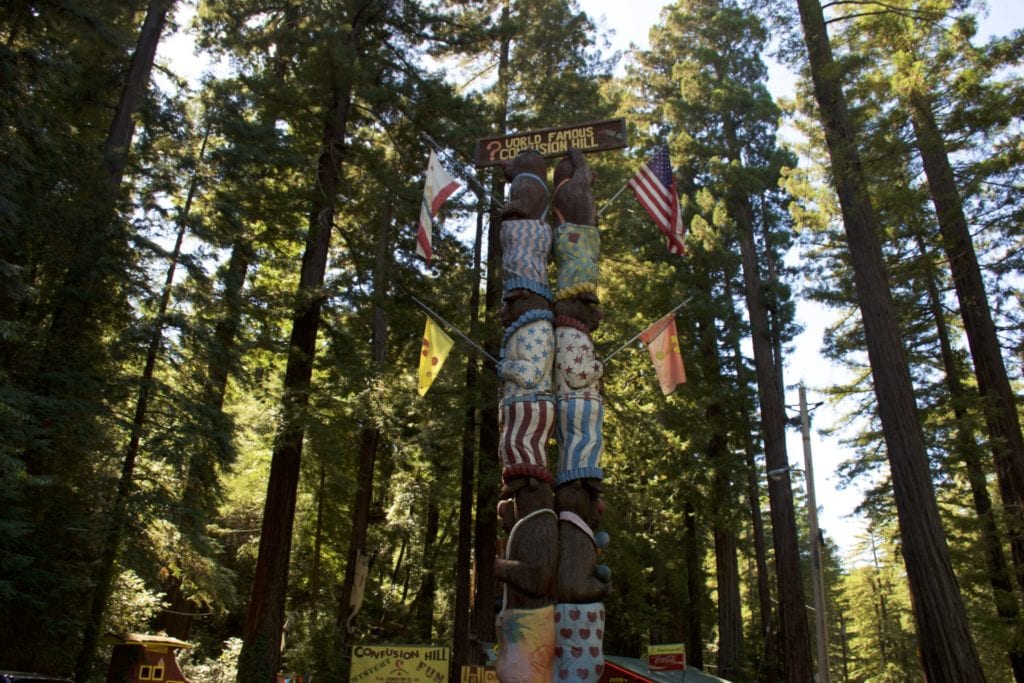 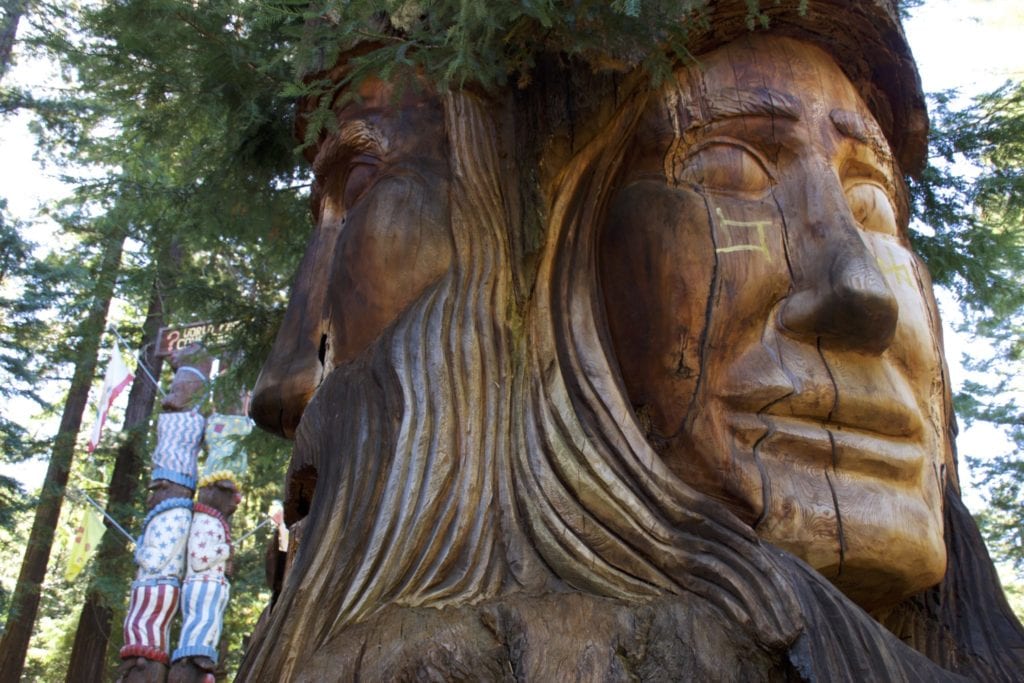 Chandelier Drive-Through Tree in Leggett is a privately-owned attraction that charges a $10 admission fee (too steep if you ask me). It’s super close to Confusion Hill, and though we opted not to drive through, we did drive past it. Most visitors who pay the admission to drive through the tree say this one is the best in Northern California. Standing at an estimated 315 feet high and 21 feet in diameter, this 2400-year-old tree is a real sight to see. Whether you drive through it or simply walk by it, it’s incredible to say the least. 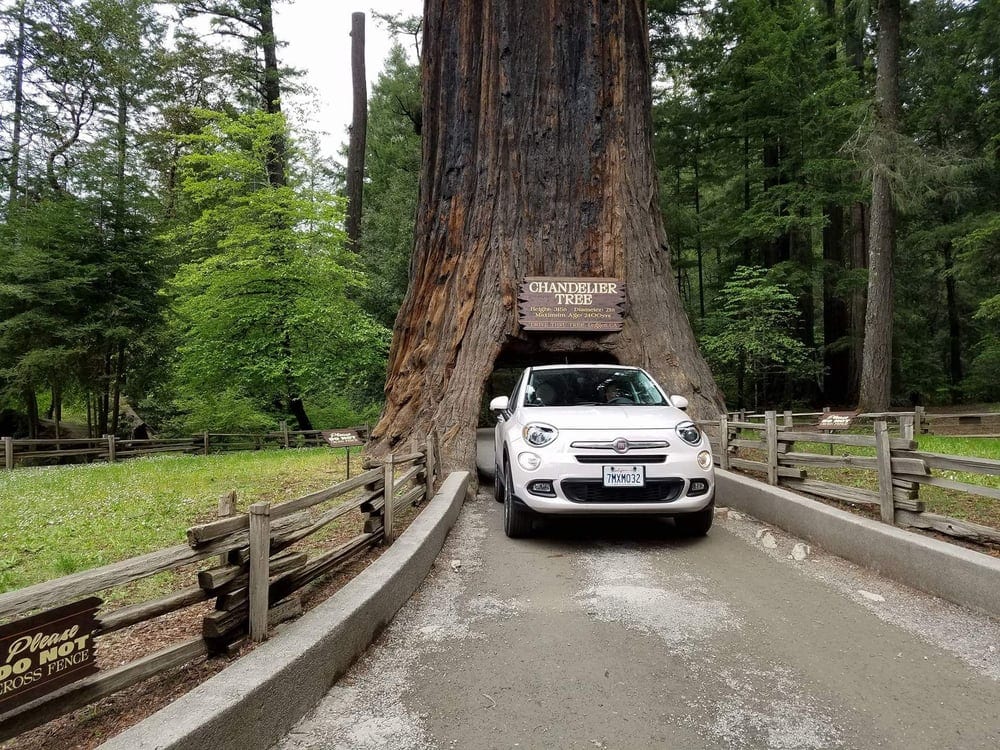 About 30 minutes later, we approached a huge colorful sign reading: Legend of Bigfoot. I stopped here thinking it would be an entertaining museum about the history of bigfoot, but instead it ended up being a half-outdoor half-indoor store selling a mixed bag of stuff. Most of the products were bigfoot related, but they also sold jams and honey, clothing, themed garden sculptures, and outdoor decor. Unfortunately, I did not learn anything about Bigfoot, which was a real bummer. Still, it was a cool stop with pretty decent photo ops. 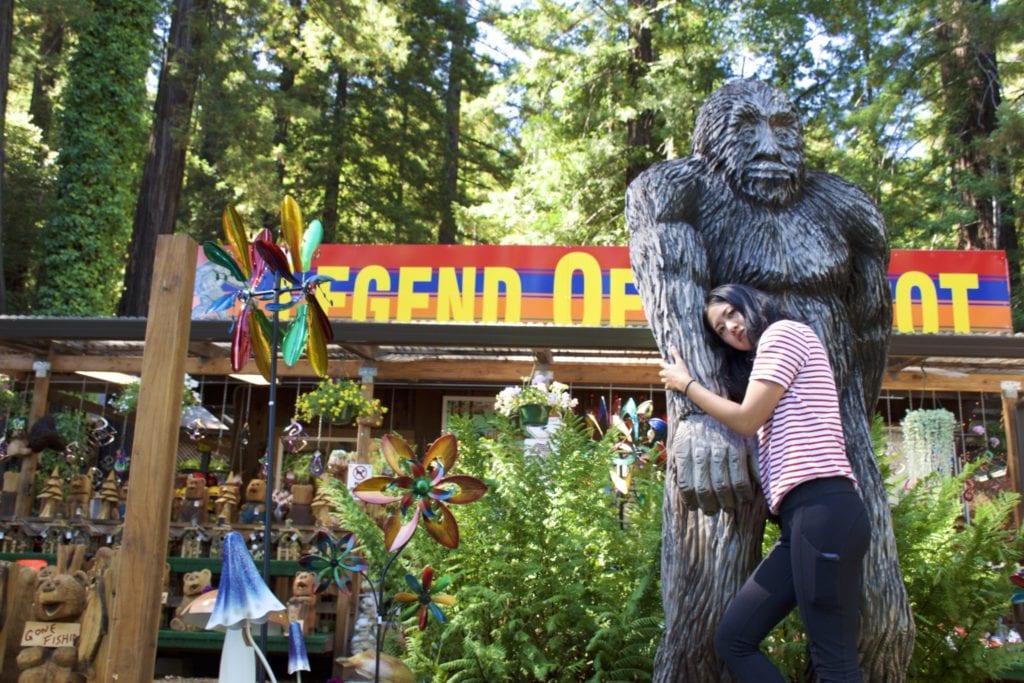 AVENUE OF THE GIANTS

Instead of continuing straight on the 101 North to reach Eureka, we decided to take the 31-mile alternative scenic route through the Avenue of the Giants. Surrounded by Humboldt Redwoods State Park, this world-famous scenic drive is by far the most outstanding display of giant trees in the California redwood belt.

What a beautiful drive, to say the least. The best part is, it’s a free self-guided driving tour (with both a North and a South entrance and 8 specific stopping points). We spent a few hours here, stopping at a few of the groves and enjoying our presence among the trees. If you’re limited on time, I’d recommend the Founder’s Grove.

Overall, I found the drive to be extremely pleasant, even for the driver. Since the roads were very well paved and not constantly winding, we were both able to enjoy the drive while soaking in the sights. 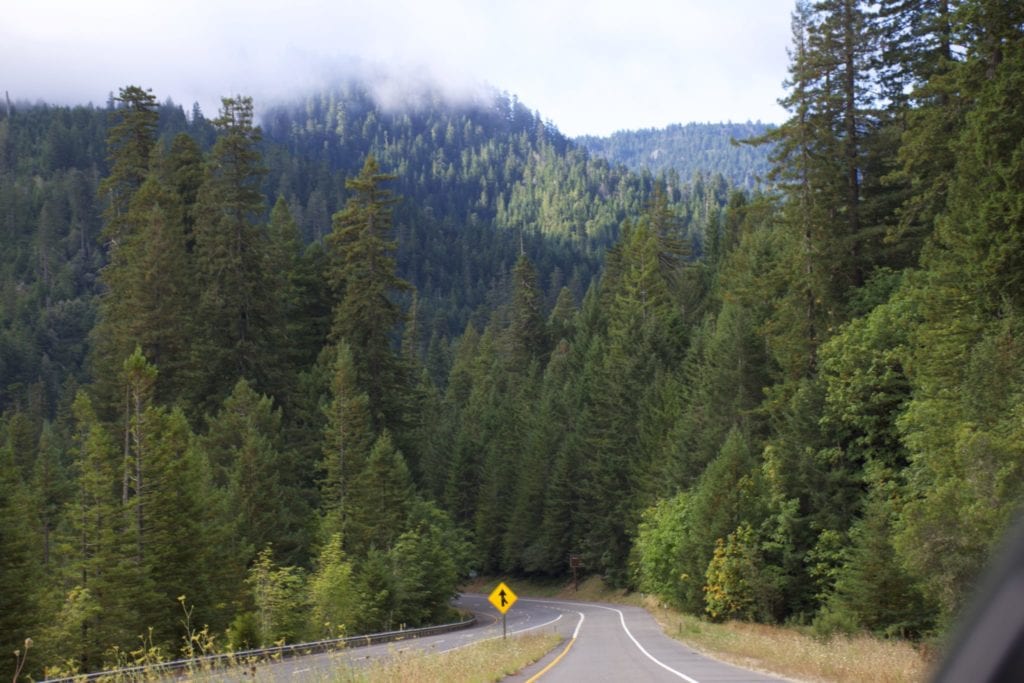 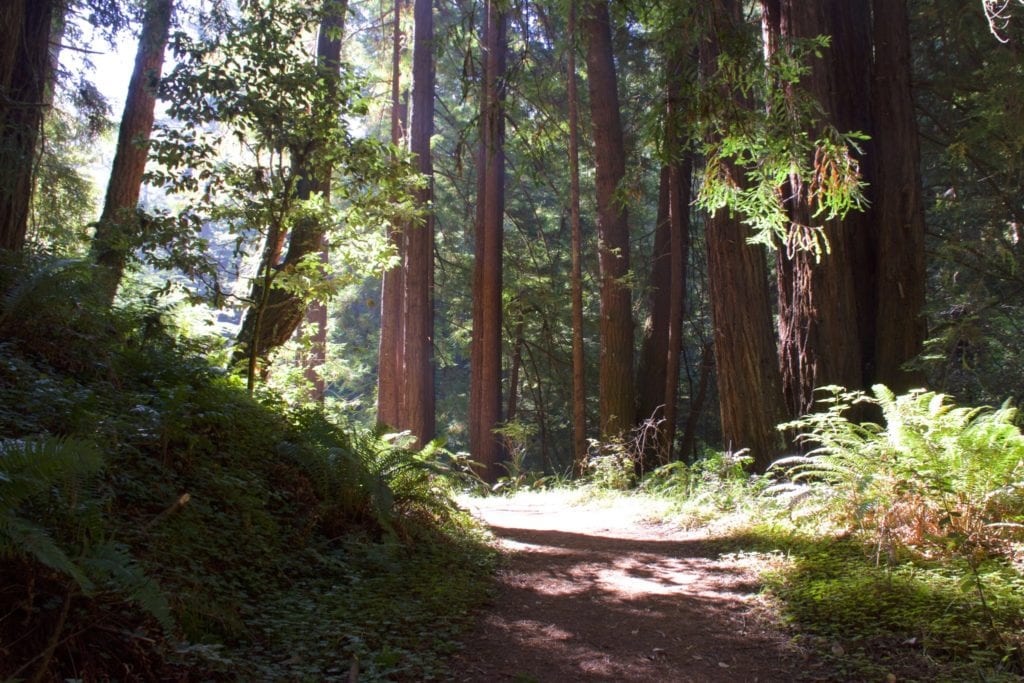 Who knew there would be such a picturesque Victorian village nestled deep in the redwoods? With its fantastically preserved Victorians, vibrant small-town charm, and history as a filming location for major movies, Ferndale, is the perfect stop when in the Lost Coast area. We strolled along Main Street, where art galleries, general stores, and boutiques complement an array of Victorian architecture. In my opinion, Ferndale tops the charts on small towns to visit along the coast and is 100% worth a stop. 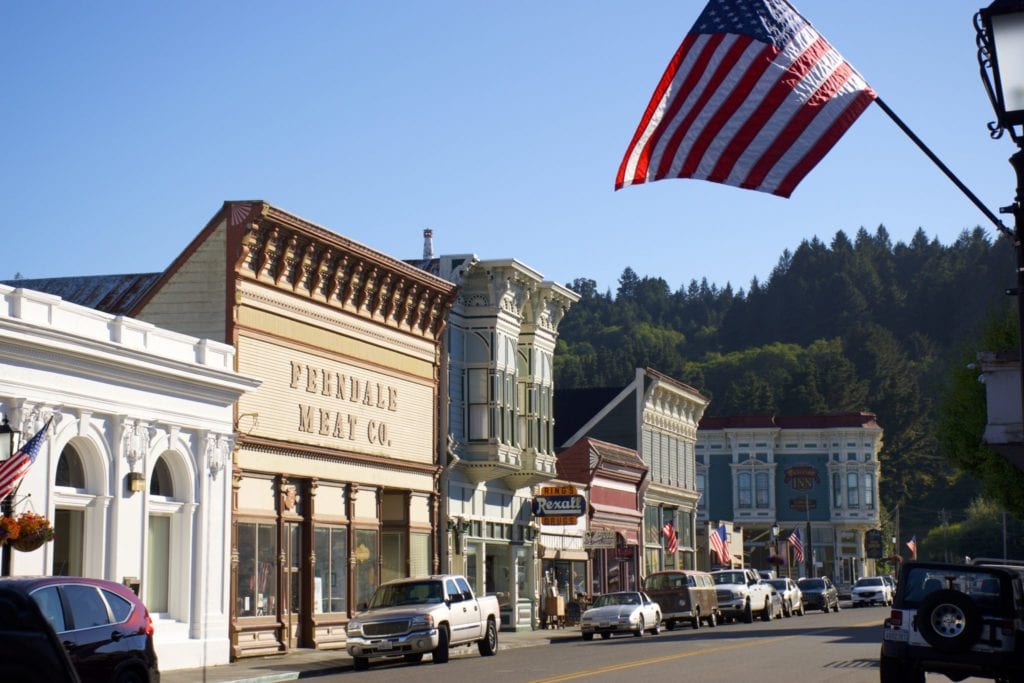 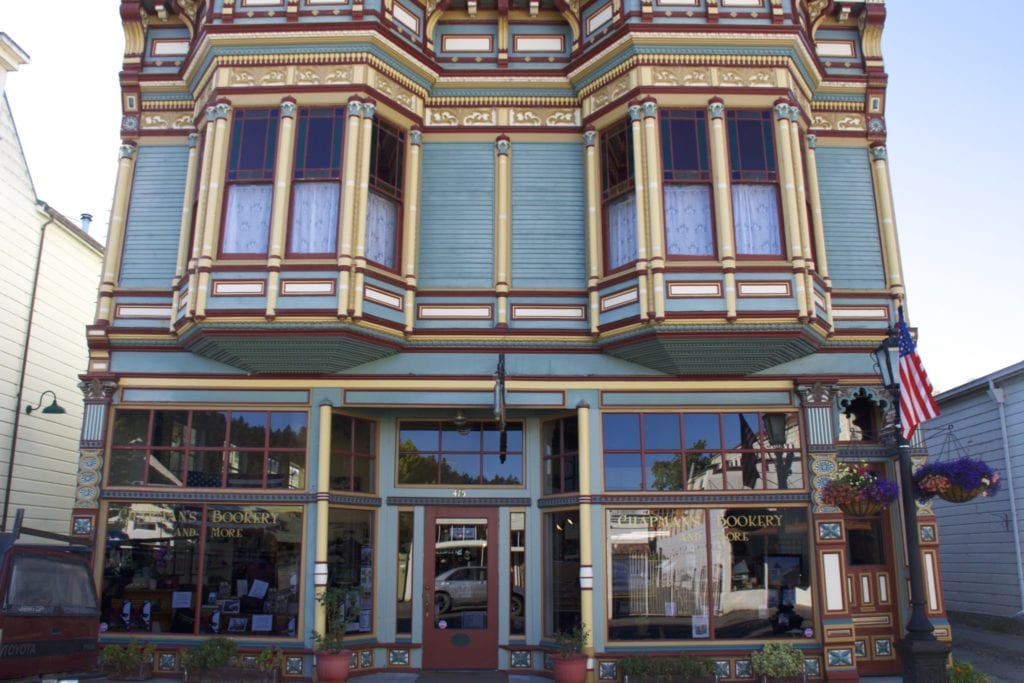 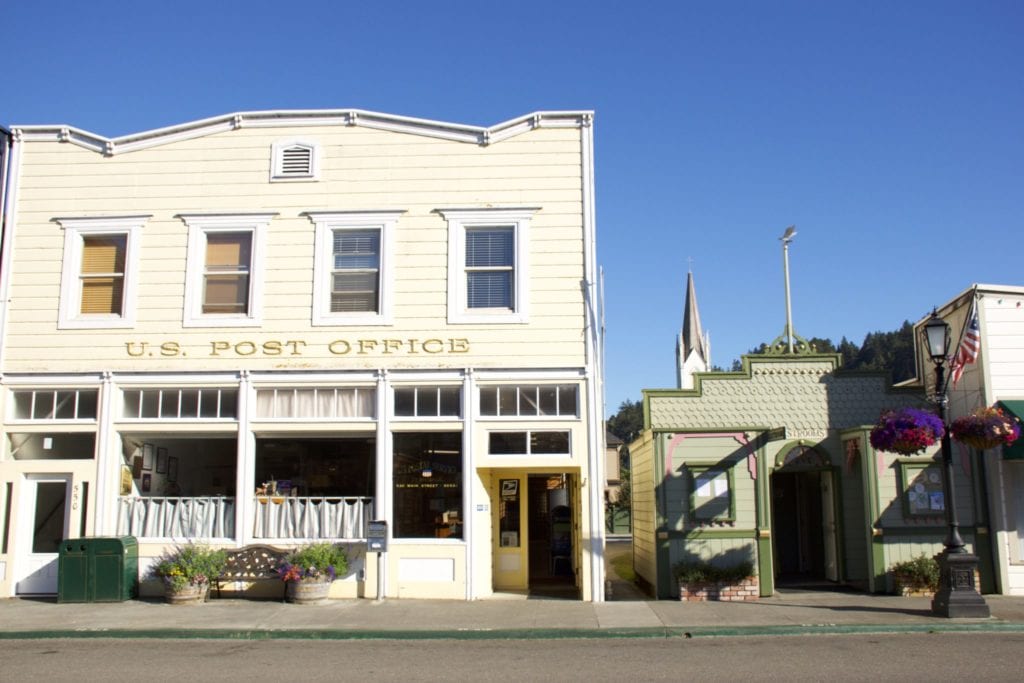 We got here sort of ‘late’ as many of the shops were closing (it was only about 5pm), but the sun was still blazing, which meant there was a lot of exploration still to do. Walking through the town elicited such excitement out of me– it was just too cute to not love.

From what I got to experience, I fell in love with one shop in particular: Golden Gait Merchantile. Named one of America’s most charming general store by Country Living, this store sells something for everyone–from candy, cookware, and antiques to local and imported specialty foods, jewelry and stationery. It’s hard not to feel like you’ve stepped back in time; the western general store vibe really makes it a cool place to just check out. Don’t miss the upstairs museum while you’re there (there are Victorian mannequins, so cool)! 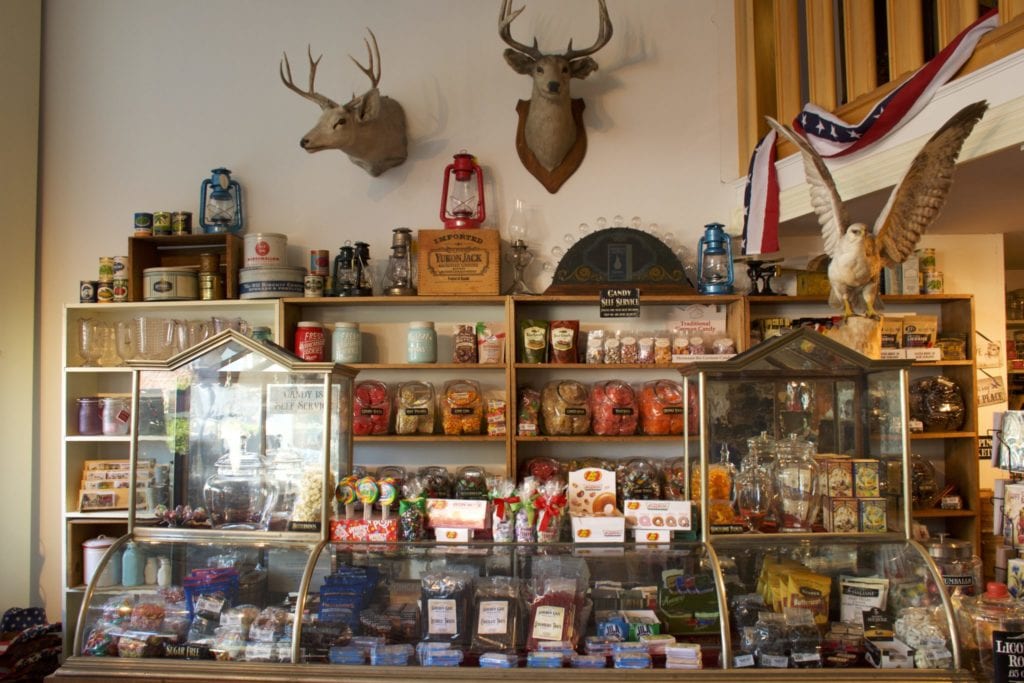 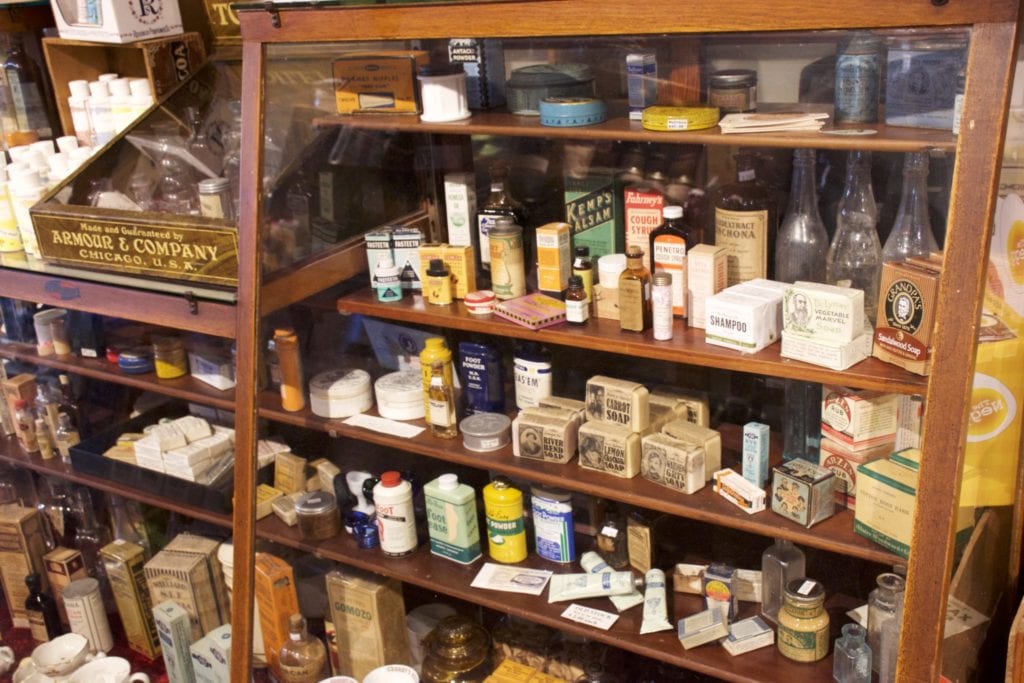 We were short on time but planned on taking a stroll down the two-mile path of the Fortuna Riverwalk overlooking the Eel River (something that I hear is as relaxing as it is beautiful). Nearby was also the famous Loleta Cheese Factory, which I fully intended to pay a visit, but unfortunately, they were closed. I heard great things!

A portion of Eureka, mainly the historical downtown, is actually really cute (pictured here), but the other half is sort of jarring. It was for sure not how I had envisioned Eureka to be at all. I witnessed a lot of homeless individuals roaming the streets and transients sitting outside of random establishments, which made the city a tad bit sketchier. Overall, it’s a poverty-stricken city with an unfortunate drug culture.

On a brighter note, Old Town Eureka is chock-full of restaurants, antique shops, clothing and lifestyle/gift shops, and art galleries. It’s a great place for a 1-2 hour stroll. If you’re passing through and looking to make a pit stop for food, check out Los Bagels in Old Town, Siam Orchid Thai Cuisine, as well as Samoa Cookhouse minutes away from Eureka, the last surviving cookhouse in the West serving up a fixed buffet menu that changes daily.  Though the city was a bit weird, the food certainly did not disappoint! 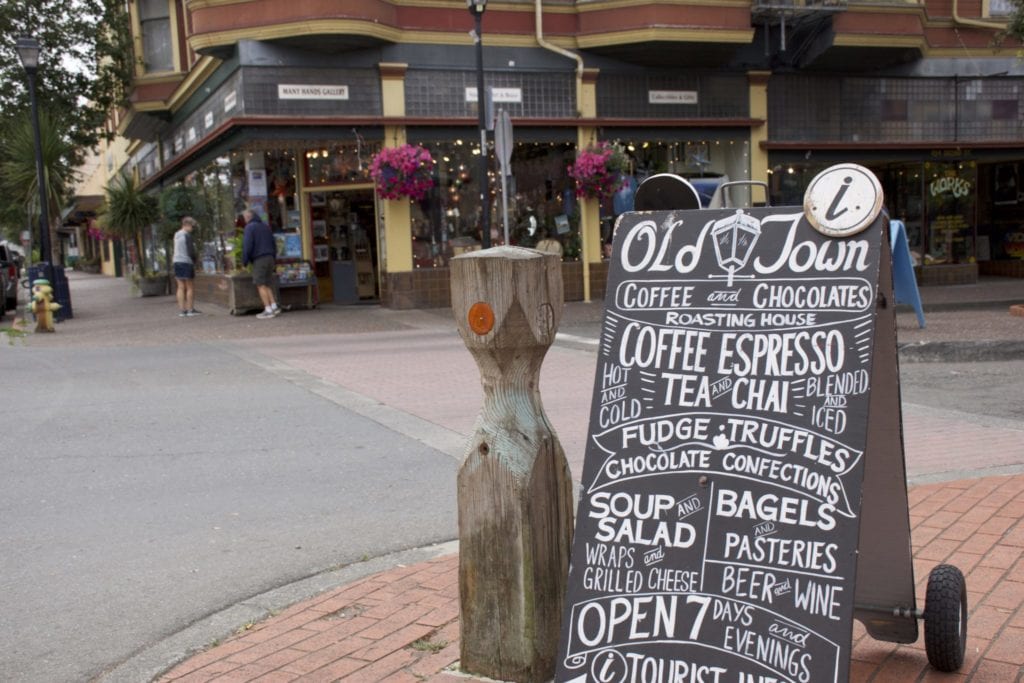 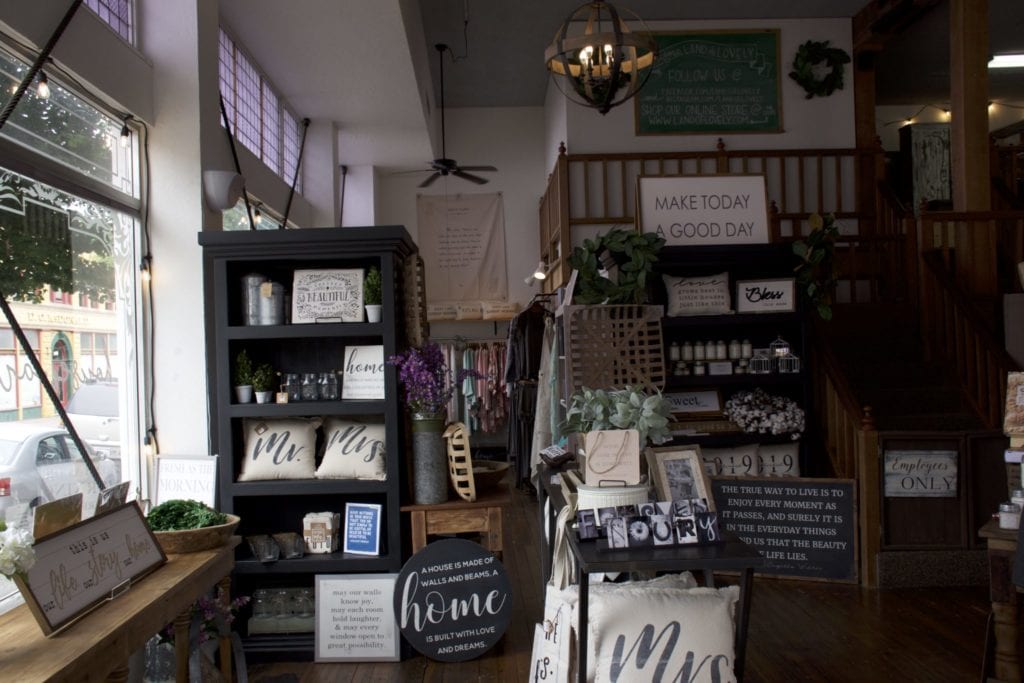 We stayed at an old Victorian Airbnb, which we made our home base for two nights, traveling back and forth from Redwood National Park. We made our way back to Eureka simply to eat and sleep after the long day of travel, and not much else after exploring Old Town and the waterfront.

If you’re looking for a place to stay up in Humboldt County on your road trip, I’d say Arcata and Eureka have the most lodging options. If you choose Eureka, I’d recommend staying closer to Old Town, as it’s close to the amenities and conveniences you’re probably looking for. 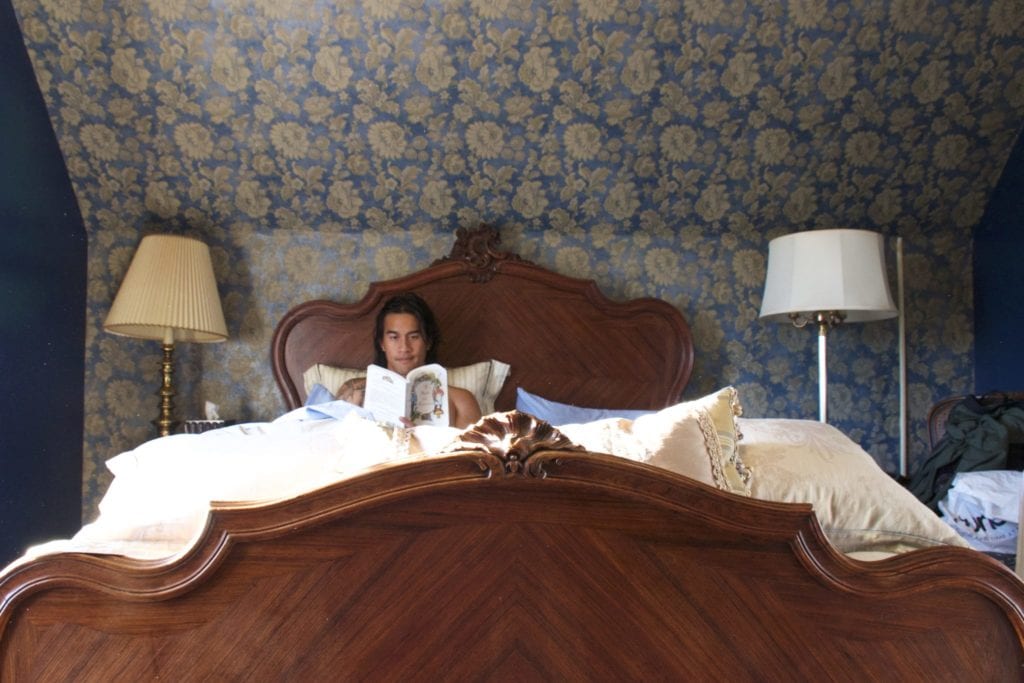 Arcata is a super short drive from Eureka, but feels worlds away. Arcata’s beginnings go back to the Gold Rush when it was a shipping and supply center for the miners on the Trinity River. Today, sprawling over the hillside above Arcata, Humboldt State University dominates the city and promotes a youthful, artistic and intellectual ambiance.

We mostly hung out in the main plaza, where lots of restaurants and shops reside. There’s an impressive lawn of grass situated smack dab in the middle of the plaza, which we fully took advantage of– a very sweet spot to rest, sunbathe, and people-watch.

What a lush and relaxing area to stumble upon! Densely covered in fog at times, we oddly found ourselves very warm on the way over to Agate Beach due to the summer sun peeking through the clouds. In researching things to do near Eureka, I found this gem of a beach and it was actually the main reason I wanted to check out Patrick Point State Park–it’s a beachcomber’s paradise. All in all, I spent about 2-3 hours here, meticulously looking for colorful rocks in the sand.

Agate Beach is two miles of solitude and splendor with awesome beachcombing opportunities. On any given day, you can find a variety of rare rocks, such as jasper, agate, and even jade (hence, its name).  To get to the beach, make sure to wear relatively sturdy shoes; you’ll have to take a decently long/curvy trail down from the parking area. 100% worth it though. Some of us just can’t pass up the opportunity to hunt for treasure on a public beach! 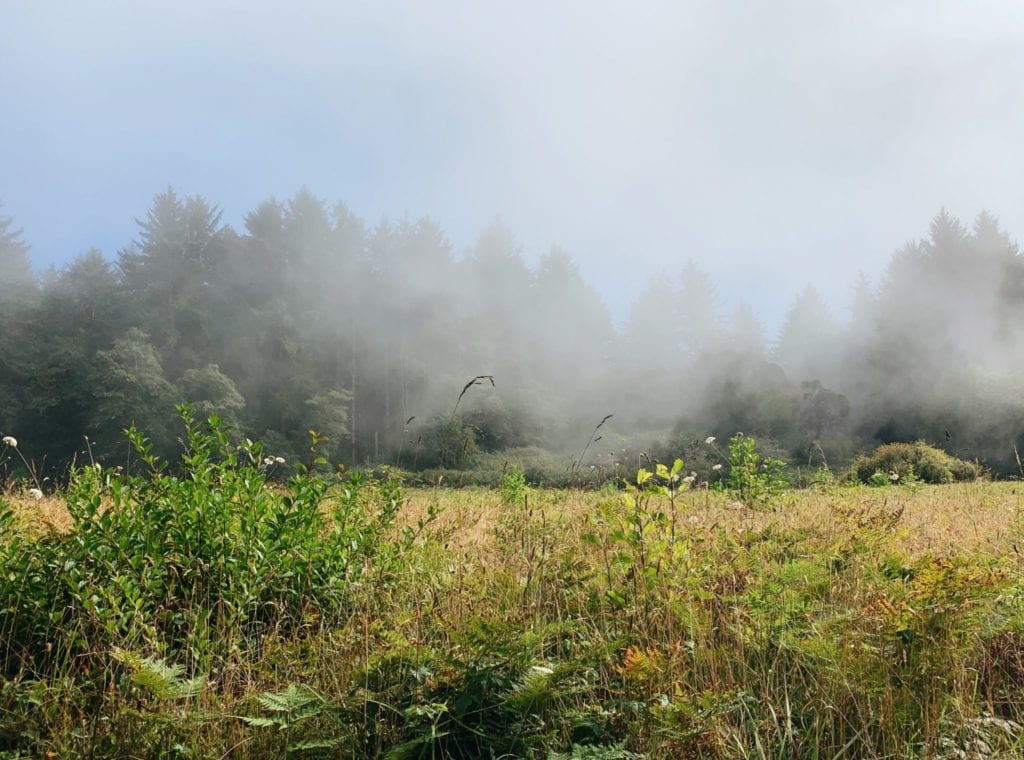 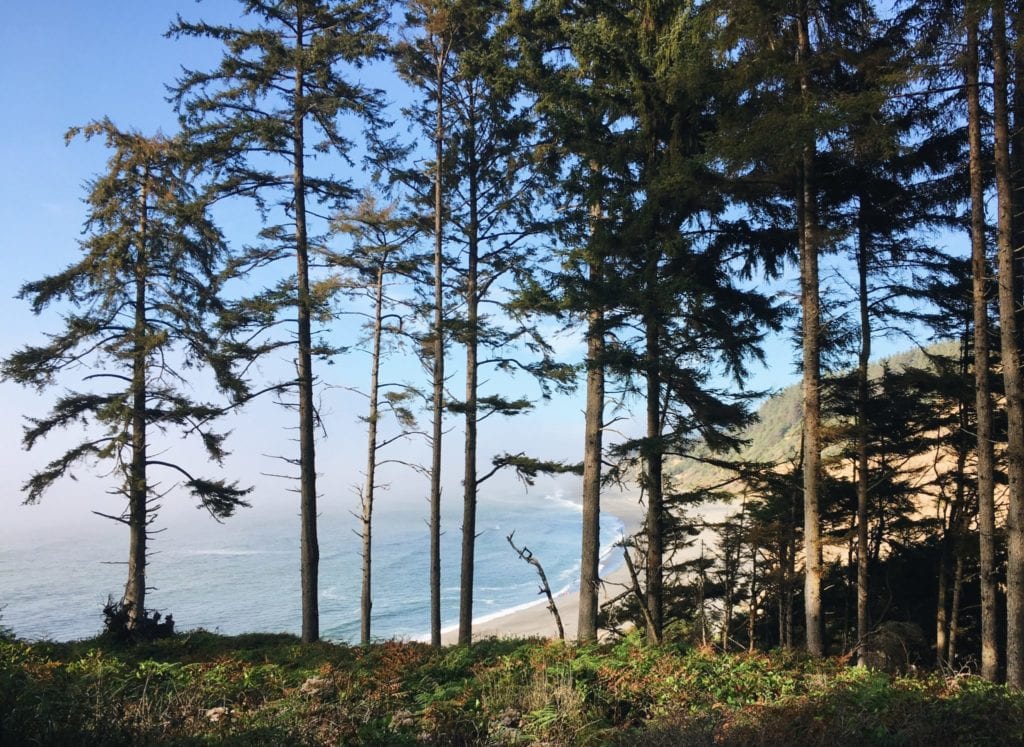 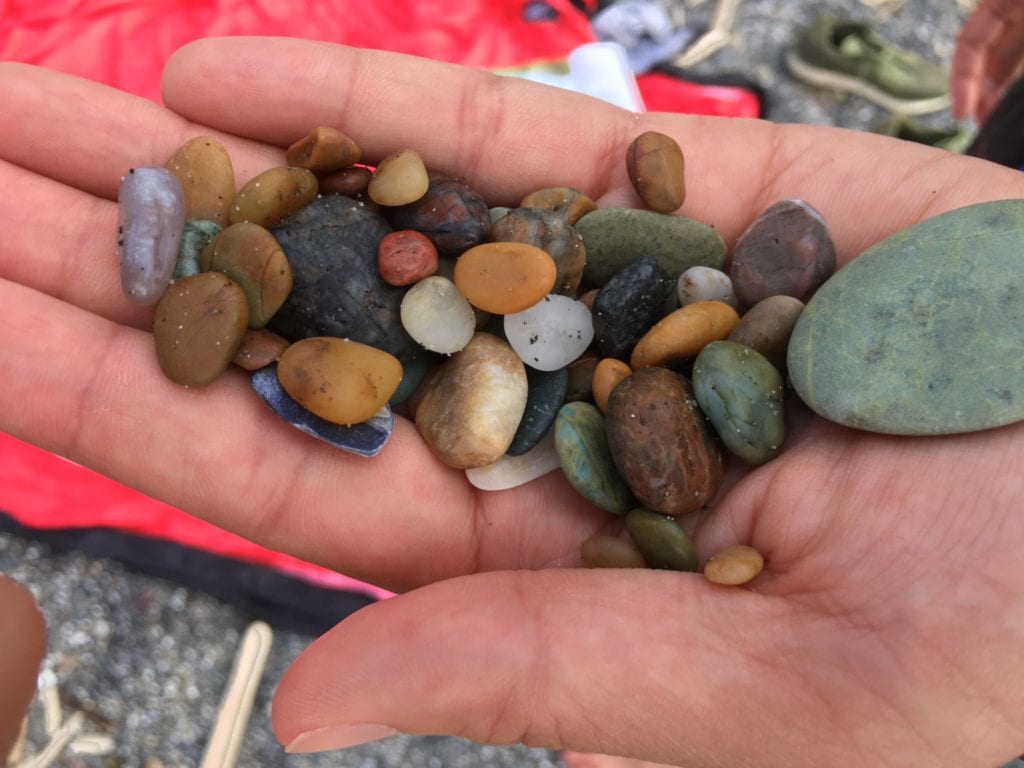 Wedding Rock was also highly recommended to us, though we didn’t get a chance to check it out due to spending too much time at Agate Beach. This state park was surprisingly big with many, many campgrounds spread throughout. We drove by Agate Campground and ogled at how amazing the campsites looked! Each campsite was separated from the next by trees and bushes, tucked away from the main road, making for a super intimate experience. If I ever make my way back up here, Agate Campground is for sure on the top of my list of campsites I’d consider booking.

Prairie Creek SP is the perfect spot for those with limited time. On our half-day visit, we were able to see lots of elks, water streams, massive canyon walls covered with foliage, as well as endless amounts of stunning redwoods. We drove the Newton B. Drury Scenic Parkway, which was an adventure in itself. Five minutes after hopping onto the parkway, we were enveloped in beautiful groves of mature redwoods lining the road. Trailheads appeared approximately every half-mile, so we picked some at random and explored different parts of the park for a few hours.

And then came the main attraction: Fern Canyon Trail. This hike really cannot be missed. It was hands down one of the most beautiful places in California I had ever laid my eyes on.

And there you have it. Hopefully, you’ve been inspired by my Pacific Coast road trip from Mendocino to the Redwood National Parks area, enough to take one of your own! I’ve done multiple trips up north and have explored many more places not described here, so check out my complete list of road trip stops for the Northern California Coast here!

Or, read about the first part of my trip from SF to Mendocino here.