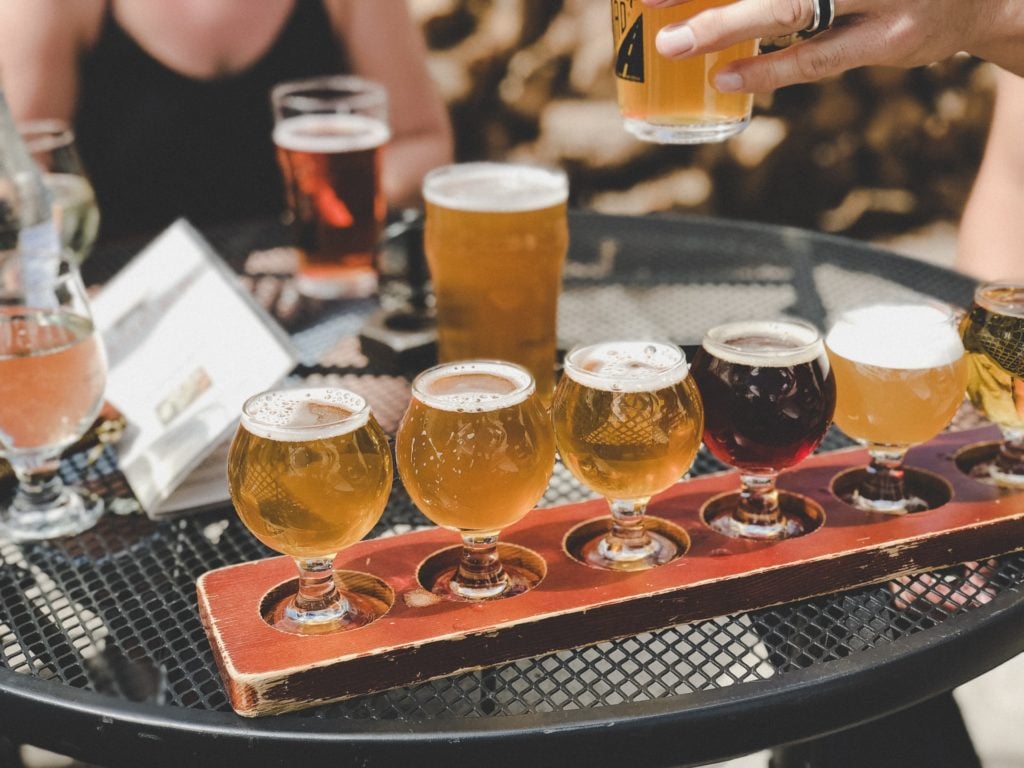 In the USA, there’s no denying we love our craft beer. Over the past few decades, beer culture (both beer drinking and beer making) has grown immensely. In fact, it’s become embedded in our culture!

Venturing out to discover new breweries and sample new microbrews is a great reason to travel. Why not plan your next trip with a focus on trying as many new breweries as you can? In this post, we reveal the 9 best cities for beer lovers in the United States.

9 BEST CITIES FOR BEER LOVERS IN THE UNITED STATES 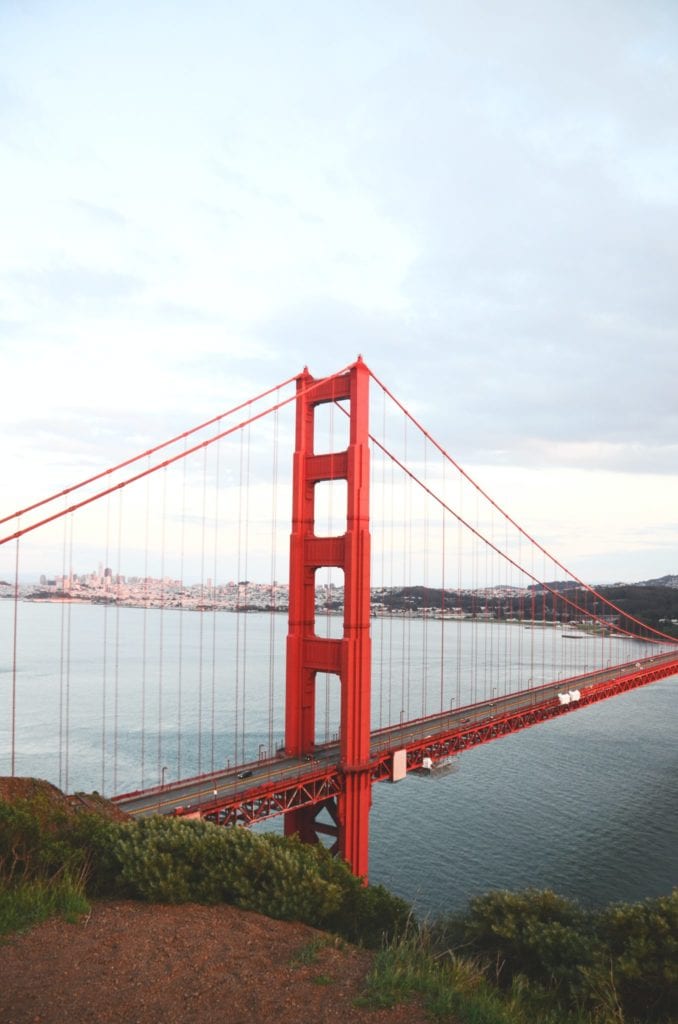 You may be more familiar with San Francisco’s cocktail culture, but beer is as loved by locals as cocktails are! With an average of six breweries per 100 square miles, the San Francisco metro area has really stepped it up in recent years. San Francisco has a strong list of local breweries, pouring everything from classic lagers to hazy West Coast IPAs.

If you don’t know where to start, head to 21st Amendment Brewing, Anchor Brewing Company, Almanac Beer Co., and Laughing Monk Brewing. IPAs are still king in this region, but breweries are starting to embrace Belgian styles, sours, and rustic farmhouse ales. There are even a few cool beer bars to check out including Toronado, a San Francisco pub with over 40 beers on tap.

With its growing beer scene, SF continues to prove that it isn’t just known for expensive living, techies, and hippies. If you’re a beer aficionado looking for things to do in San Francisco, brewery hopping should definitely sit at the top of your list! Come enjoy the plethora of excellent craft breweries, taprooms, and gastropubs in San Francisco.

Looking for even more breweries in the Bay Area, CA? Head across the bridge to Berkeley, California for iconic local favorites like Fieldwork Brewing Company and Gilman Brewing. 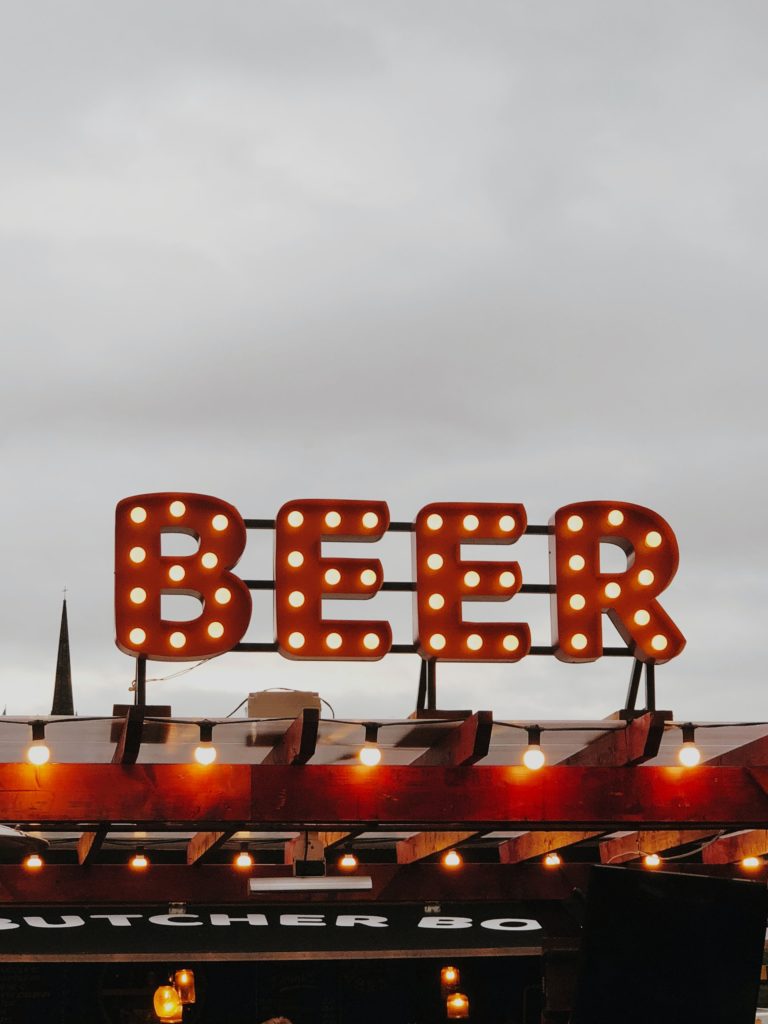 For decades, the midwestern city of Indianapolis and its beer scene were relatively bland, evident based on the fact that Miller Lite reigned supreme. The city began to transform over the years (hosting a Super Bowl, creating a new bicycle and art scenes), as did the craft brew choices. Today, the craft beer scene is booming. In fact, Indy was recently voted a Top Five Beer City by readers of USA Today.

The city has two different bus tours that will ferry you from brewery to brewery, and dive bars even have Stone Ruination IPA on tap alongside Pabst Blue Ribbon. Don’t miss Sun King Tasting Room or Tomlinson Tap Room.

If you want to start exploring, the Indy Craft Pass is an ideal way to begin your journey while earning rewards. Feel like sampling beer in a different style? Join a brew bus or pedal pub tour!

The craft beer scene in Chicago is exploding. The city has been dubbed the craft beer capital of the country, with more breweries than any other U.S. city. For reference, there are 160 breweries and counting. Whether you’re downtown or hanging out in one of Chicago’s diverse neighborhoods, you will find a unique Chicago brewery or taproom in nearly every corner of the city.

To start, Chicago classics include Goose Island, Forbidden Root, and Greenstar Brewing. For something a little more creative, check out 5 Rabbit Cerveceria, the first Latin American-inspired brewery in the U.S. There’s even a Michelin-starred brewpub, Band Of Bohemia, where the drinks pair so well with the food it puts forth.

So what are you waiting for? Come enjoy the plethora of excellent craft breweries, taprooms, and gastropubs in Chicago. Here’s an exciting food & drink combo tour to get you started: Bikes, Bites, and Brews: Chicago’s Signature Dishes Bike Tour.

Philly has had a longstanding history with beer. In fact, Philadelphia once brewed more beer than any other place in the Western Hemisphere. By 1920, the city had more than 90 working breweries—with 100 more outside city limits. This beer culture is so deep-rooted that to this day, one Philly neighborhood still refers to itself as “Brewerytown.”

The city has earned a slew of beer-related accolades, including being named one of the best beer cities in the world by Frommer’s. In terms of numbers, more than 90 breweries dot the region.

There are so many beer events that take place throughout the year, so if you’re a beer lover, be sure to time your trip strategically to hit up one of these events. You can’t miss the Philly Craft Beer Festival in March or Philly Beer Week, a 10-day event taking place from late May to June. 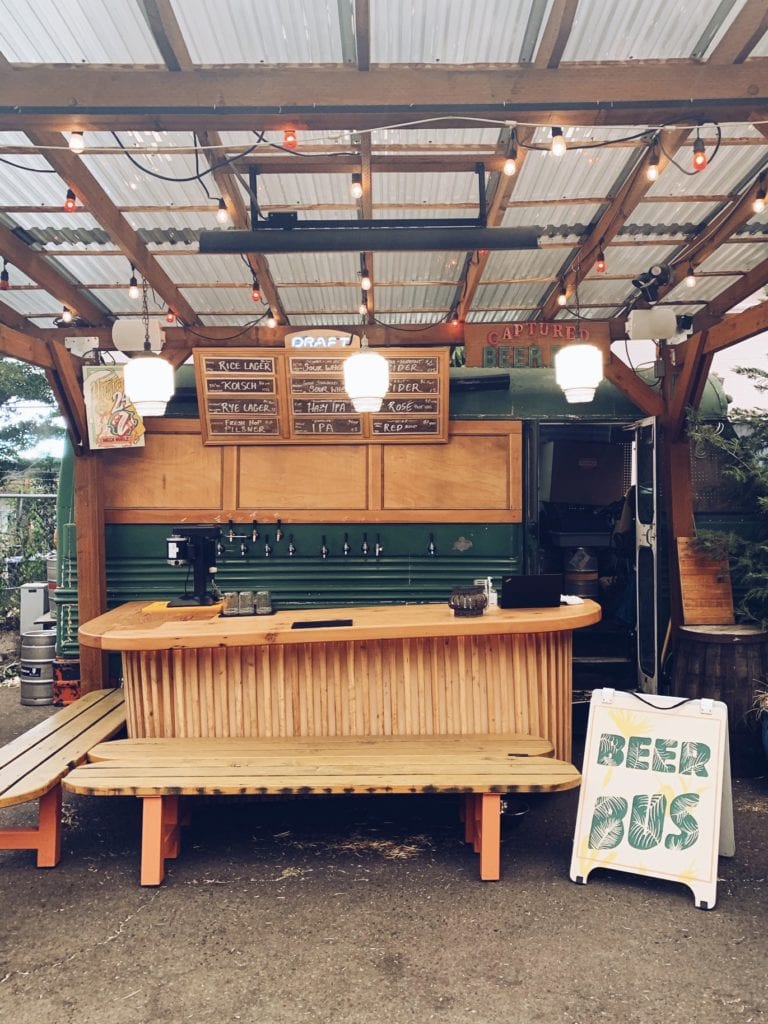 Portland, Oregon is almost synonymous with the word “beer”. In the land of the hipsters, it comes as no surprise that there are 70+ breweries in Portland. Since the early 1980s, Portland brewers have been hard at work, pioneering the craft beer movement with fresh local ingredients such as Willamette Valley hops and barley and Bull Run water. All that hard work has paid off because Portland’s beer scene is off the charts poppin’.

With so many entertaining brewpubs and beer gardens (along with a ton of beer-themed events throughout the year), the evergrowing beer scene here has helped the city earn its nickname of “Beervana”. Wondering where to start? Try Base Camp Brewing, Breakside Brewing, or Little Beast Brewing, four of our favorite breweries in the wonderful city of Portland.

Looking to take beer tasting to a whole other level? Try a Portland Brewery Bike Tour!

Bend is proving that Portland isn’t the only city in this Northwestern state that knows how to make good beer. The Deschutes Brewery is home to their lineup of pioneering beers, The Ale Apothecary ferments beers in old oak trees that they hollow out themselves, just to name a few. In fact, Bend, Oregon has nearly 25 breweries for every 100,000 residents, so there’s a lot to explore and taste.

A few of our favorite breweries include Crux Fermentation Project, boasting a massive outdoor space perfect for a day in the sun and serving up brew bites and pizza, as well as 10 Barrel Brewing, featuring creative IPAs and sours plus the best brewery food in town.

Looking for an ale trail? You’re in luck. The Bend Ale Trail is essentially a super fun way to discover the dozens of breweries in the Bend area. Founded in 2010 with only 6 breweries, the Bend Ale Trail was the first Ale Trail in the West and only second in the nation. Today, there are 20+ breweries spanning from Bend to nearby towns of Sunriver, Sisters, and Redmond. Grab a passport map from the visitor’s center or online here.

No purchase is necessary at any of the brewery stops, though they all provide you the opportunity to try some new beer flavors and brewpub eats. Not only will you be able to taste some creatively concocted beer, but you will also get to enjoy lively outdoor patios, tasting rooms, fun events, live music, and even brewery merch that you can take home as a souvenir. 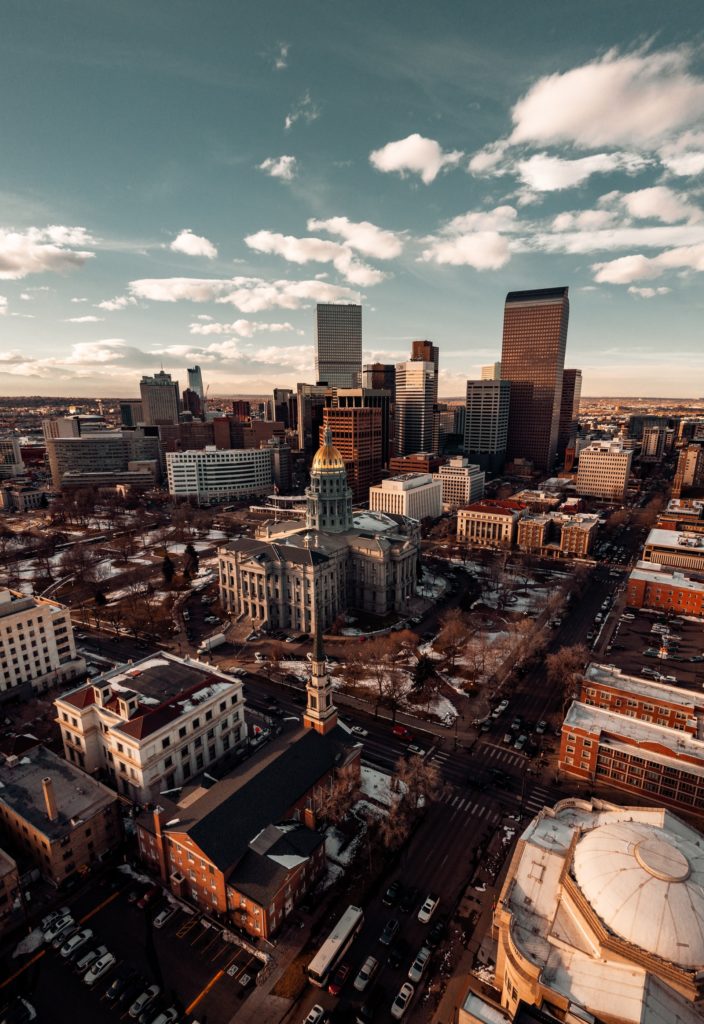 Beer aficionados, you’ll be happy to know that Denver is home to 80+ breweries, making it one of the best cities for beer in the US. This city is no stranger to craft beer, as they are one of the dominators at the Great American Beer Festival every fall. Thanks to its wide array of microbreweries, brewpubs, and taverns, beer lovers are making pilgrimages to The Mile High City to sample some of the world’s greatest brews.

Local staples include the aptly named Great Divide Brewing Co. and Woods Boss Brewing. Jagged Mountain Craft Brewery is great as well, offering a fine selection of traditional ales while pushing the boundaries on what craft beer enthusiasts think is possible in specialty craft beer. Last but certainly not least is Denver’s first brewpub, Wynkoop Brewing Company, which produces more than 4,000 barrels of fresh beer annually, earning it a place among the largest brewpubs in the country.

Find out why Denver has been dubbed the “Napa Valley of Beer” on this Denver Microbrew Tour, a 1.5-mile guided walking tour in downtown Denver’s historic LoDo (Lower Downtown) neighborhood. The tour includes 10 samples at four of downtown’s best breweries and taprooms.

Breweries and beaches—these are probably the top two things San Diego is really known for. With more than 150 breweries across the county, it’s no wonder the city is known as the “Craft Beer Capital of America”. During your visit, it’s almost impossible not to step into at least one taproom while wandering around SD’s vibrant neighborhoods.

The beer movement in SD is unreal, which is why SD is one of the best cities for beer lovers. The region’s craft/micro/nano breweries are churning out innovative beers, including the West Coast IPA (a local twist on the IPA), that have been winning awards left and right at national and international contests.

In San Diego, you’ll find an eclectic mix of well-established brewing companies such as Modern Times Beer, Ballast Point, Stone Brewing, and Karl Strauss Brewing. Some newcomers totally worth checking out include Harland Brewing Co. and Kairoa Brewing Company (our two personal favorites). Many of these breweries have outdoor beer gardens and patios, beckoning you to enjoy a pint in the sun. 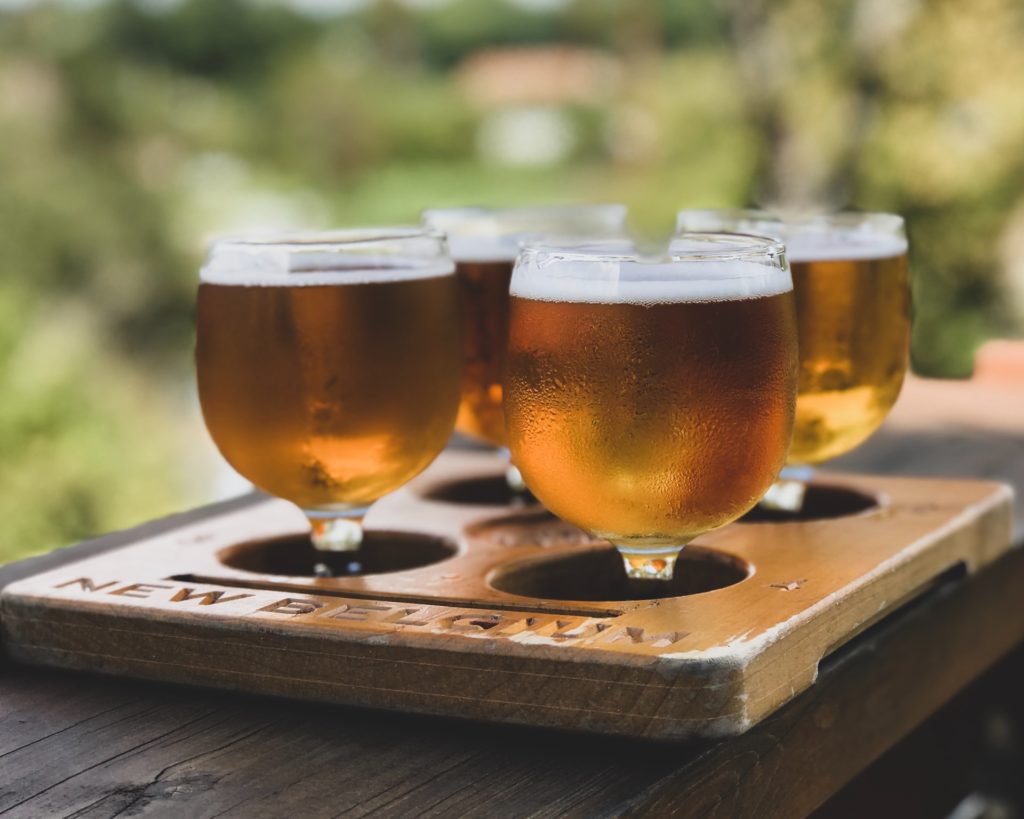 Asheville is a beer lover’s paradise. Over the last decade, Asheville has established itself as one of the country’s meccas for craft beer enthusiasts. Many of the city’s best breweries are located in the South Slope neighborhood (also known as the “Brewery District”), an old industrial part of town that’s been on the rise most recently.

Don’t know where to start? Start at some of the most established breweries, including Highland Brewing or Green Man Brewery. Both establishments were founded in the mid-90s, and have been pioneers in the Asheville beer movement. Asheville Brewing Company, an Asheville staple, offers pizza and $3 movie viewings in addition to their lengthy tap list.

Wicked Weed Brewing is another good option, specializing in West-coast style hoppy ales, open-fermented Belgian beers, and barrel-aged sours. Their locations include a brewpub in downtown Asheville, a “Funkatorium” (a sour and funky beer-dedicated taproom) in the South Slope Brewery District, and a 50-barrel production brewery in West Asheville.

If you’re looking for a guided brewery tour, check out Asheville Brewery Tours. They will give you behind-the-scenes access to many local downtown breweries, including meeting with the brew-masters and understanding their craft and brewing process that leads to their beer on tap.

And that’s a wrap! We know, this barely scratches the surface of the best cities for beer lovers in the United States. There are simply so many great US cities out there for craft beers.

Is a beer city you love not listed here? Drop us a comment to let us know why they deserve to be on this list!